by a princess in process 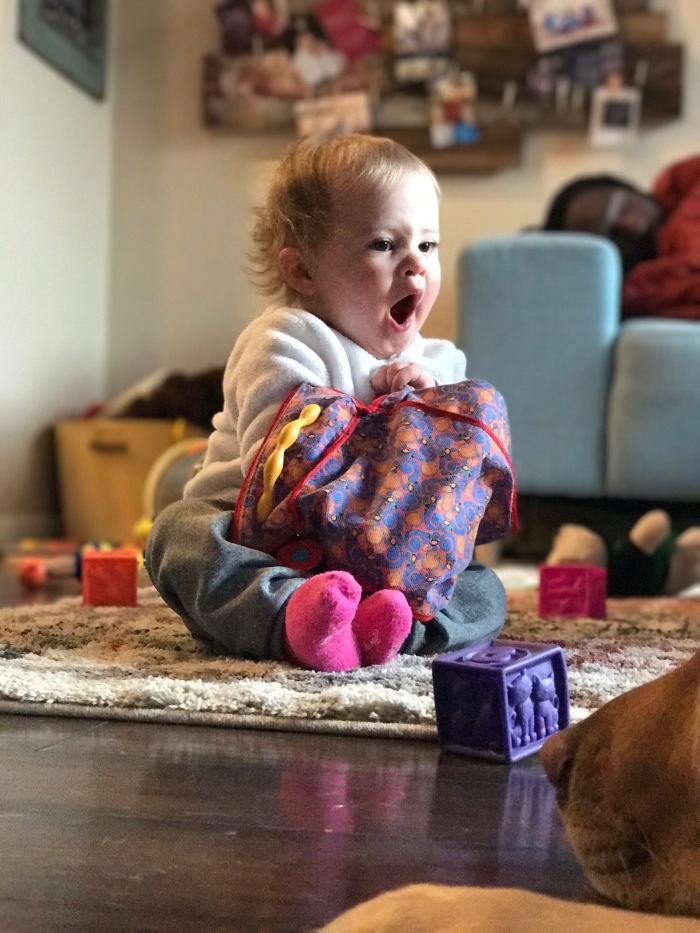 Laying on the floor surrounded by broken glass, spilled milk, water, oats, and disappointment, I just allowed the tear to dance down my cheek. I couldn’t pretend anymore. I could not apologize anymore for the failure of the day. I had to just press my cheek against the cold ground and let go. And it felt good.

The day was hard. Yesterday. Yesterday was the type of hard that makes you feel on the edge of insanity.

Summer stopped sleeping again – so we have been graced with another season of sleep deprivation. I woke up with good intentions – I rocked her while nursing and tried to pry my eyes open. I talked myself into good intentions through ample breath prayers and warm thoughts of coffee.

Then, I came downstairs and fell into our routine.

Summer is now opting for both extremes: clinginess and fierce independence. A dynamic and exhausting combination.

During this moment, on the floor of my kitchen, I peeled off my mask (that I didn’t even realize I was wearing) and just let myself ask the question that had been burning under the surface.

Am I enough? Will I ever be enough?

I’m learning this is a question I wake up with every day. The desire to “be enough” is one that has surfaced countless times through days of struggle and season of hardships.

I so desperately want to “be enough” to fulfill my husband’s needs for love, pleasure, fun, and happiness. I want to “be enough” for Summer’s growth and development: to stimulate her brain, provide security and safety, nurture her strong little body, inspire a healthy spiritual life, and cultivate strong social skills.

But, I have not felt like enough this week. In fact, the last few days could have qualified us for some sort of reality TV show. Or at least some form of intensive family therapy.

We were sick from December 13th until about January 27th, so we are just re-entering society in some ways. One would think we would jump quickly into the world of play dates and grocery shopping…and, well, I’d like to. But…it has not been so easy. Some days have rendered tortillas and peanut butter for dinner. And other days, I’ve waved my white flag at 10am and we have just watched Secret Life of Pets over. And Over. And Over.

Trying to dig out from under mounds of dirty laundry, catch up on the dishes, change the sheets, and re-stock the cupboard after such a long and grueling season of sickness requires time and energy – tough commodities to find with a strong-willed toddler by your side.

Just as we wave goodbye to sickness, Summer stopped napping – her arrangement, not mine. She has skipped multiple bath times, she has oranges and strawberries matted into her hair (at least I hope that is what that is) and I keep finding hidden foods in her diaper? (She is in footie onesies. Figure that one out). She has gone a full 24 hours wearing the same pajamas. And she has started throwing food – and some tantrums.

Me? Well. I have showered, by the grace of God. But, I have not managed to don an outfit without mashed fruit in it, and my hair products have consisted of mashed banana and some sort of mystery stickiness that comes from Summer’s hands (I’m now convinced toddler hands just ooze stickiness). I ran out of toilet paper and have been using huggies wet wipes instead – an upgrade, I’d say. And most days my attempts to accomplish any sort of goal bows in the presence of tantrums, fatigue, and a new, napless schedule.

Ryan? He is holding on. Tight. He is literally the most amazing man you will ever meet. Just last night, he slept maybe 2 hours so that I could enjoy 6 hours of sleep. He slept upright, in a chair, holding Summer. He has been so gracious to pick up groceries on his way home from work, and pick up the pieces of disarray when he gets home. He has been a friend to me when I have felt lonely in the midst of being sick and tired.

Baylor? Poor guy. I ran out of dog food two days ago and I have been unable to leave to buy more! Enter, Amazon prime. I ordered the dog food and decided he would have to live off of minute rice and veggie chips in the meantime. He has been staring at me as if I’m some sort of monster. Finally, his food came and I realized I accidentally ordered the geriatric version. Now every time I fill his bowl, he quickly empties it and then looks at me with a sad sneer on his face. Sorry, pup, this $50 isn’t going down the drain.

Well, I attempted the workout, but it was interrupted by Summer’s unwillingness to nap. I tried to do dishes, but she clung to my leg and fussed the entire time. I tried to read, but my eyes glazed over in fatigue. I tried to do laundry, but I had forgotten to turn on the dryer and the clothes sat wet overnight. I tried to speak kindly, but it felt nothing was working.

I had mostly held it together, having only a few moments where I allowed anger and frustration to influence my behavior.

Then, I tried to make supper. I got out the chicken and all of the ingredients. I lifted out the crockpot and dusted it off. I unwrapped the meat and began to cook. I thought something smelt a little strange, but I pressed onward, overlooking the smell in the craze of Summer fussing and Baylor begging me for non-geriatric food.

Due to Summer’s crazy behavior, catching up after a month and a half of sickness, and my fatigue, we had eaten out countless times already this week. I so desperately wanted to provide a healthy, home-cooked meal. And I was excited and proud that I had finally done so!

Ryan arrived home, and we greeted him with the usual excitement.

“You made fish!!” he said, upon entering the house.

Needless to say, that hug I planned on giving him didn’t happen.

I was not upset with him, I was upset at the notion that perhaps the chicken dish I made was, indeed, bad. We tried a few bites and instantly felt a gurgle in our stomachs. “Why did I not pay more attention to that fishy smell? Why did I just waste all of these groceries on this meal? Why did they sell me bad meat?”

I think I apologized 17 times on the way to the restaurant. I apologized for wasting the ingredients, for making the house smell like fish, for causing us to exceed our budget, for not looking closer at the chicken, for using chicken instead of beef, for apologizing…

Upon entering the restaurant, I noticed I was still mostly wearing pajamas, I had forgotten to put a bra on. I wasn’t wearing deodorant. My hair was literally on the side of my head. No make-up. No jewelry.

I realized my struggle-mode was obvious when the wait staff began to bring us free food.

We finished eating and returned home. Overwhelmed by the aroma of fish, we began lighting candles and working to rid the home of the stench.

The night carried on as usual. Bath time, nursed, rocked/wrestled to sleep, waved my white flag – laid her in the crib and walked away. I journeyed down the stairs with some look of tired surrender on my face. My joints ached and my head hurt.

Having picked up the pieces from the failed supper, I decided I could get ahead of the game by making a healthy, overnight-soaked, oat breakfast. I diced the strawberries into tiny pieces and filled the jar with the ingredients. As I turned to place the pre-made meal into the fridge, the jar fell and shattered. Surrounded by glass, oats, milk and berries, I just laid on the ground. And I wept.

Things did not get better. Summer awoke a couple hours later screaming and continued to cry hysterically for several hours. Teething? Sickness? Leap? Who knows at this point. I cried hysterically with her and just begged God for an easy button. I just wanted something to feel easy.

I wanted to feel like enough. But instead, I felt like I just kept failing. And Summer’s crying seemed to highlight the failure.

I slept a few hours and woke up. I nursed Summer and went downstairs and decided I’d sit. Not only would I sit instead of bustle around the kitchen, I’d sit in a different chair and take in the landscape of my life. And it all looked different.

Suddenly, the Lord played back my yesterday through a new lens. As a movie, He showed me scenes from the day I had brushed past. Moments where His glory entered in.

Like the moment Summer slept for 45 minutes, or the 20 minutes of exercise I was able to enjoy. Like when she climbed into a box and danced. Like when we realized the meat was bad before eating the entire meal. Like the free food that made its way to our table at supper. Like the dance party we had around the kitchen as a family before bedtime. Like the laughs we shared as we wrestled with Baylor on the ground. Like the chocolate Ryan bought me that I ate before bed. Like the moment Ryan and I held hands on the couch and laughed at a short comedy. Like when Ryan came rushing to help as the glass shattered and picked me up as he saw my tears. He held me and looked me in the eyes and said, “you are enough. It is never about what you do for us.” Like the extra hands that were present when I was at the end of my rope at 2am.

My mental movie was interrupted by a little voice. “Hi,” Summer said. I looked up to see her sweet, tiny-tooth, grin. Her little voice, oh how it can melt my heart.

Changing perspectives can be powerful. Sometimes when things are hard, we need to switch chairs. Today has not been easy. In fact, it’s been really hard. I have not cooked dinner yet. I have not cleaned. I just realized I forgot to fix that laundry issue, again.

But, I’m learning that perhaps the greatest relational challenges come from trying to “be enough” for one another, instead of realizing that YOU are enough. Not what you do, not what you accomplish, but who you are. If we spent more time on our character, on our surrender, and on our hearts, then perhaps we would enter into a newfound satisfaction with our relationships.

I have every intention of discussing love and relationships in the month of February. In preparation, I have read books. I have studied Scripture. I have interviewed 10 of my favorite couples that have been married 30+ years. I have interviewed amazing women about sex and sexuality. I cannot wait to share this gold with all of you.

But, as I leaned into the heart of God to start this series off, I felt him urging me to start with where I am today: